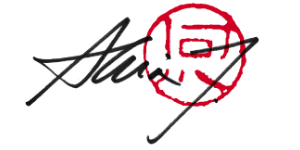 Ania about her project: This portrait is a journey into the magical world of His symbolism – illustration inspired by the story of the God Ganesh, who is the highest deity in Hinduism. I recommend that you read the myth telling the story of how it came about, it’s really interesting …

I was intrigued by the fact that his image is a collection of fascinating symbols. Each aspect of this figure carries a message. Called the Galactic God, he keeps the balance in the universe between the four basic elements – dharma/calling, artha/wellbeing, kama/joy of life, and moksha/freedom.

Ganesh teaches us – for example, the lotus flower he is holding in his hand is a symbol of rebirth, survival – a beautiful flower emerging from mud – the light always comes after the dark, and beauty is born…
Ganesh is the beginning, a new way in life. As an amulet, he accompanies us in creating positive changes, steps forward. As a patron of success and survival, he also provides protection from adversity, levitating in space against the background of the grey and turquoise skies. And being simultaneously the beginning and the end, he is firmly planted in the greenness of Mother Earth.
The yellow colour that I used in graphical elements of the illustration also carries much symbolism and is connected to the story of Ganesh – among other things, the myth says that his mother used turmeric in the process of creating her son. The colour yellow is also closely connected to the Muladhara chakra, and Ganesh is the deity guarding this chakra.

The well-known Om symbol, hiding behind the head of Ganesh in an abstract form, is also mentioned in the symbolism of this god. In its shape, it is also considered the physical reflection of his figure.
I am fascinated by print on fabric, so the background of the illustration is additionally decorated with ornaments and patterns referring to an old Hindu technique of applying prints to fabrics – each element is printed separately by hand with a stamp. It is an activity that manifestly teaches one patience and precision… which is… what god Ganesh is teaching us 🙂

The most perfect version of REBEL SKIN leggins in history. Sports leggings designed specifically to enhance the female figure and ensure perfect workout comfort. Rebel Skin sports leggins are a one-off product. Each our model is a unique piece, polished up in every detail, signed by the artist working on its creation. Artistic concept & prefect practical execution. We are really PROUD OF OUR LEGGINGS!

Put the Rebel’s Skin on.

There are no reviews yet.

Show reviews in all languages (20)

You may also need